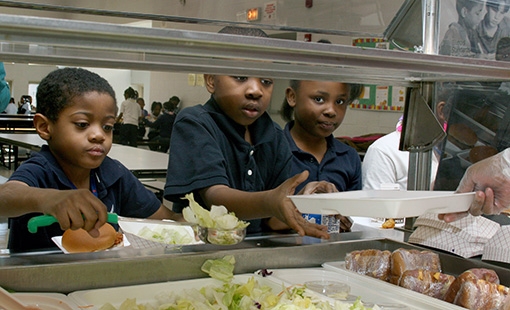 Schools should be healthy places for all students to learn and grow.

Schools should be healthy places for all students to learn and grow — from the lunchroom to the classroom and everywhere in between. It’s hard to think of anything of greater impact than for schools to serve nutritious meals to the more than 30 million children who participate in the national school lunch program.

While this seems like common sense, this year the politics of school food will be even stronger than usual, and it seems like “common sense” will be up for debate. The Child Nutrition Act (currently called the Healthy, Hunger-Free Kids Act) is up for reauthorization this year, and groups on both sides have begun carving out their positions.

The loudest voice on the other side of the debate has been the School Nutrition Association (SNA) — the national organization that represents school food professionals — whose position is to rollback the current school nutrition requirements, which call for more fruits and vegetables, more whole grains and lower amounts of sodium. However, a number of recent reports have come out refuting the SNA’s strongest points of opposition to the new standards.

Participation is up, not down
For one, a Food Research and Action Center (FRAC) report showed that school meal participation is actually on the rise among low income students — the very ones who need healthy school meals the most due to food insecurity and increased health risks — and has dipped among students who do not qualify for free or reduced-price lunch. However, the report explains that both trends go back as far as the 2007-2008 school year (coinciding with the “Great Recession”), rather than when the updated nutrition standards went into effect during the 2012-2013 school year.

In its report, FRAC concludes that “attributing declines [in the National School Lunch Program] to the implementation of the nutrition requirements in the Healthy, Hunger-Free Kids Act ignores long-term trends in program participation and overlooks the confluence of factors driving participation change. Faulting solely the nutrition standards updates fails to consider the constructive means of addressing decreases in participation … which do not compromise the health and wellness of millions of children across the country.”

Plate waste is down, not up
Then there’s a University of Connecticut Rudd Center report stating that the healthier school food standards have led to a 13 percent decrease in plate waste. The Rudd study concludes that, “Students responded positively to the new lunches. They consumed more fruit, threw away less of the entrees and vegetables, and consumed the same amount of milk. Overall, the revised meal standards and policies appear to have significantly lowered plate waste in school cafeterias.”

All this while last week thousands of SNA members were on Capitol Hill demanding more “flexibility” (their word for rollbacks) around the nutrition standards, arguing that the updated standards have caused increased plate waste and decreased lunch participation — which, according to the two aforementioned studies, is simply not true.

Challenges
To be fair, SNA is also asking Congress for more funding to account for the increased cost of healthier food, which is something we fully support. And there are no doubt real challenges when it comes to substandard school kitchen facilities and staff training, not to mention an as-to-be-expected adjustment period for everyone involved, including students and food manufacturers.

(Side note: Look no further than our Cooking up Change program for proof that even within the current budget and facility constraints school meals can be healthy and delicious, and to learn how high school culinary students have found creative and commonsense ways to overcome these challenges.)

Flexibility is not free
But as Bettina Elias Siegel pointed out in her recent Lunch Tray blog, SNA president Julia Bauscher went so far as to admit that the ask for more money is nothing other than a bargaining chip to be traded in as her association doubles down on the ask for flexibility, because it’s “free.”

Well, “flexibility” is not free. It comes at the expense of children’s health.

There’s a hard cost, too. A recent report by the Union of Concerned Scientists estimates that obesity costs the U.S. $210 billion each year, or 16.6 percent of our total health care costs. The study goes on to state that “Schools are a critical place to introduce and reinforce healthy behaviors that serve as a strong foundation for childhood development and increase children’s chances of living healthier lives,” which can have the very real impact of preventing higher healthcare costs in adulthood.

We’re not calling for all fast food restaurants to be shuttered or soda to be removed from the grocery aisle. We’re asking for our schools to serve healthy meals that help students learn and grow. We can’t afford not to.