Why We Uninvited SNA from Cooking up Change 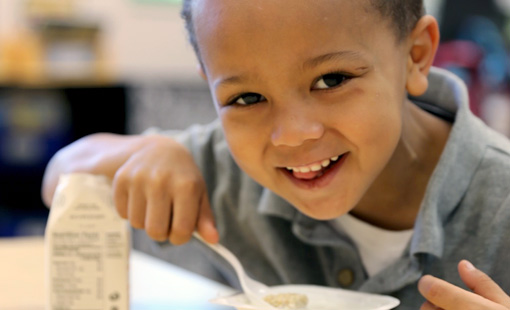 The attack on the current nutrition standards for school food

On Monday, high school culinary students from across the nation will gather in Washington, D.C., for the Cooking up Change national finals to present their vision for school food: a healthy, great-tasting lunch they’ve created with limited ingredients on a tight budget.

The winners will be selected by a panel of judges that includes chefs, education leaders and advocates for healthy school food. In the past, this panel has included a judge from the School Nutrition Association (SNA), the organization for school nutrition professionals.

This year we were yet again pleased to have SNA represented by its current president. However, we’ve decided to un-invite SNA as a Cooking up Change judge.

Cooking up Change is about elevating student voices. It’s also about advocating for the resources to ensure all children have access to good, healthy food at school and celebrating the progress we’ve seen in recent years toward this goal. Most importantly, it’s about cheering on these incredible student chefs as they show the world how very appealing healthy school food can be.

Recently, SNA has taken a stance in opposition to these goals and values. And it simply doesn’t make sense for Cooking up Change to include an organization actively working to undermine advocacy for healthy food in schools.

Throughout its long history, SNA was a champion for student health and better school food. The school nutrition professionals they represent are often underappreciated champions for good food. HSC has had strong ties to SNA in its own 11-year history, partnering to support green cleaning, breakfast in the classroom , working with SNA leadership to promote health and local food in our home state and in Chicago and more. We worked especially closely with SNA in advocacy leading up to the 2010 reauthorization of the Child Nutrition Act, The Healthy, Hunger-Free Kids Act. SNA was an important ally and key leader in the success of this effort.

But that now seems like a long time ago.

This year, SNA has called on Congress to make the Agriculture Department grant waivers from the new rules for any school that says its school-meals program has been losing money for six months, and it asked USDA to roll back some of the regulations. The grounds: The new foods are expensive, and some children don't like them.

House Republicans jumped at the chance to side with this “industry” request. The House Appropriations Committee approved the waiver request on a party-line vote. SNA's problem is that almost everyone else is against them, including first lady Michelle Obama, Agriculture Secretary Tom Vilsack, the American Medical Association, the national Parent Teachers Association, and retired military officers, who are worried that too many young Americans are too obese to serve their country.

It’s a fascinating story, and it outlines the split between factions within SNA (for example: “19 former presidents of the association have come out against SNA'S position on the rules”) and the role SNA has played in the history of the National School Lunch Program.

As those of you who have worked with HSC over the years know, we are big believers that groups with different perspectives can work together effectively toward shared goals. We even pride ourselves on bringing together diverse coalitions with members who may otherwise never interact. We don’t need to agree on everything in order to collaborate productively around a specific goal.

So when SNA released its 2014 position paper outlining its goals for the next reauthorization of the Child Nutrition Act, we were concerned but optimistic that we’d still be able to work together. We understand that SNA works in a world of limited budgets with many competing priorities. We believed at the time that inviting SNA to be part of Cooking up Change was in line with respecting our partners’ different perspectives while engaging them in elevating student voices on health and nutrition.

Our perspective changed when SNA began to take part in the political attack on the current nutrition standards for school food. SNA has since positioned themselves as a lead organization in supporting a complete rollback of these science-based nutrition standards and even asked Congress to take it a step further by making permanent amendments to the law to reduce sodium, whole grain and vegetable requirements. (These are the same standards that both HSC and SNA worked so hard to support in the 2010 reauthorization.)

Our kids deserve so much better than this. One in three children in the US are overweight or obese. Our country already spends more than $190 billion annually on health care for obesity-related conditions. And the obesity epidemic hits even harder in the very communities where students rely on school food the most.

On Monday, the high school culinary students of Cooking up Change will share their incredible energy and bright vision for what school food can become. They’ll be cheered on by advocates and leaders committed to working toward a future where healthy school food is the norm.

It’s unfortunate that SNA won’t be there to support them. I hope that one day we’ll again have the chance to work alongside SNA toward this vision.