Winning Cooking up Change with a Cajun Po’Boy 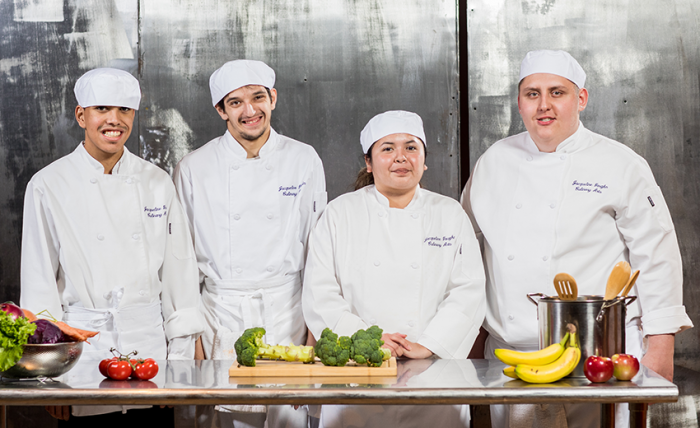 When Vaughn Occupational High School culinary instructor Melinda Calderon saw how nervous her student chefs were at the beginning of the Cooking up Change competition last Wednesday, she wrote an inspirational message on the back of the team’s chalkboard sign: “Squad: You got this! Take your time! Breathe! You’re a rock star!”

By the end of the night, Vaughn was celebrating its first Cooking up Change win with its menu of Cajun Po’ Boy, Elotes Salad and Apple Dippers. “We couldn’t believe it,” says student chef Adrianna. “This year, we won!”

Student chefs Adrianna, Ezequiel, Hector, Justin, Litzy and Manny took their inspiration for the sandwich from a sandwich one of the student chefs tried at a restaurant. They all enjoyed the spicy flavor.

For the first time ever, Cooking up Change guests were able to try and vote on breakfast dishes created by student chefs. Breakfast is an essential component of the school meal program, and the teams took on the challenge of creating an easy-to-eat, delicious school breakfast. Prosser Career Academy took first place in the breakfast category with their Spicy Egg Burrito & Fresh Banana. “Healthy food doesn’t have to just be healthy; it can be delicious,” says Prosser student chef Alhaji.

Students from winning teams receive a $1,000 scholarship to Washburne Culinary and Hospitality Institute and autographed cookbooks from John Colletta, a Cooking up Change judge. But perhaps the most exciting part of winning—in both the lunch and breakfast category—is that student chefs will see their menus served at CPS schools across the district.