Working to Get the Lead Out of Schools 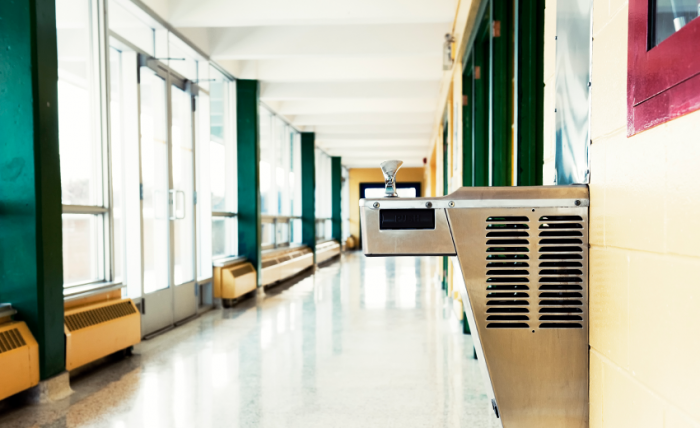 This week is National Lead Poisoning Prevention week. Lead exposure can cause health problems in all people, but it’s especially dangerous for young children, where it can cause behavioral problems, learning disabilities and other health issues. A new report released last week by the Health Impact Project includes several recommendations for making sure that school provide lead-safe environments for children, including investigating and mitigating drinking water hazards and lead paint hazards in schools and child care facilities.

The issue of lead contamination in drinking water was very much in the news in 2016 and early 2017, as Chicago Public Schools and other districts around the country, partly in response to public pressure around the water crisis in Flint, Mich., began testing school drinking water, and finding some alarming results. For instance, in Chicago, the district tested 316 schools by Sept. 1, 2016 and found elevated levels of lead in 100 schools. Massachusetts, which is one of just a few states to test extensively and publish results, found that nearly half of the tests (49.7 percent) resulted in elevated levels of lead.

No national law requires schools to do this testing. In early 2017, in response to public pressure and organizing by environmental and children’s advocacy groups, Illinois passed a law requiring schools to test for lead in drinking water, though the law does not specify any requirements around remediation.

What comes next? It’s important that advocates don’t let awareness on this issue fade. Find out more about steps you can take to push for lead testing and remediation in schools by participating in the National Lead Poisoning Prevention Week Twitter Chaton Oct. 24; downloading the Health Impact Project’s new report, 10 Policies to Prevent and Respond to Childhood Lead Exposure; and using the Get the Lead Out campaign’s template for writing your governor.

You can also register for a November three-part webinar series specifically about lead in school drinking water presented by the University of California’s Nutrition Policy Institute and the National Drinking Water Alliance, in partnership and with support from Kaiser Permanente. Topics include Why Are We Talking About It? Drinking Water and Lead Exposure, Planning for School Water Quality: Steps Schools Should Takeand  Solutions: Find It and Fix It—Or Flush or Filter it.

Previous
Residents Breathe Easier, Waste Less at the University of Michigan
Next
Making the Case for School Health Services