A School Food Revolution in Detroit 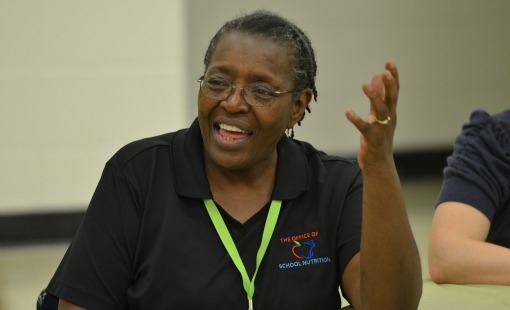 Betti Wiggins grew up on a farm in southeast Michigan. “Produce is near and dear to my heart,” she says.

Now she’s the Executive Director of the Office of School Nutrition at Detroit Public Schools (DPS), and she’s brought that love of fresh produce and local farms into her work. As a result, she’s transformed the DPS school meal program. Now, nearly one quarter of the produce served to the district’s 55,000 students comes from Michigan farmers. But Betti would love to get that up to 40 percent.

Betti began her transformation of the school meal program in Detroit in 2007, after the Institute of Medicine recommended that schools serve less processed foods. That was three years before 2010’s Healthy, Hunger-Free Kids Act raised nutrition standards for school meals across the country. “The new standards are very responsible,” Betti says. “I don’t consider the new standards to be a challenge; I consider them to be a responsibility.”

It was that belief and Betti’s leadership that made DPS one of the first districts to institute the Community Eligibility Provision (CEP), which allows schools meeting a threshold of students qualifying for free and reduced-price meals to offer free meals to all students. During the 2011-2012 school year, breakfast participation increased 15 percent and lunch participation increased 30 percent over the previous school year.

While the program was started to address malnourishment in the nation’s students, the new crisis is obesity. One way Betti has changed the meal program to address unhealthy habits is by incorporating more fresh food and adding school gardens.

More than half of DPS schools now have school gardens—80 in total. The school garden program is run by a garden director, a farmer and a horticulturalist. Each school commits staff time to running the school garden, and an army of more than 200 volunteers tends to the gardens on the weekends. DPS also runs two farms: a 7.5-acre and 4-acre farm. More than 7,000 ears of corn and 3,000 potatoes went straight from these farms to the lunch trays of DPS students.

One of the dishes that students create from their school gardens is something Betti calls Stoplight Salad, a mixture of red tomatoes, yellow squash and green zucchini. It’s great for the students to see the entire lifecycle of their food, from seed to plate. Her next challenge is to move away from ranch dressing, a Midwest staple. So far, the district has tried a dressing of Greek yogurt, mango and pear with mostly positive results.

This is a debate Betti knows well, and one she doesn’t take lightly. “This is the most revolutionary thing I’ve done since protesting the Vietnam War,” she says.

Previous
Five Ways to Get Students Involved In Green Cleaning
Next
The Aha Moment: Why John Abels Loves Cooking up Change

Our Work to Support Chicago—Now and in the Future

How to Keep Kids Active at Home