A Winning School Meal Ready for its District-Wide Debut 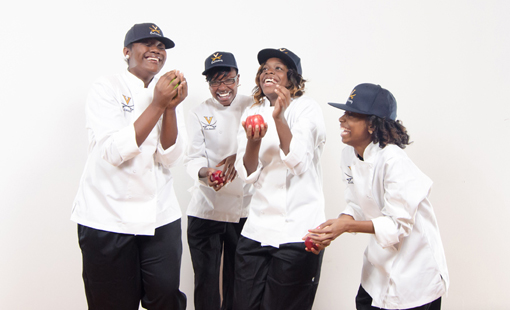 Next month, the winning meal from Cooking up Change Chicago makes its big debut across the district!

Cooking up Change puts student voices front-and-center in the national dialogue about school food, and students created their recipes using real-life constraints, limited ingredients and tight deadlines. But for CVCA, the journey is only beginning.

In February, the CVCA meal of curry chicken, Caribbean garden salad and “plantains” makes its debut across CPS, where it will be served to about 400,000 students. Then in June, the CVCA team goes on to national finals in Washington, D.C. where it will compete against nine other teams from across the country and have the meal served in Congress.

The CVCA meal was a big winner at Cooking up Change. The salad included homemade pineapple-cumin dressing, and the “plantains” were bananas baked with honey, nutmeg and cinnamon. For the main dish, students used Amish chicken drumsticks seasoned with curry, thyme and garlic. The team’s theory?  “Kids love spicy food,” said Mallory M., a senior. “We wanted [a meal] that would make us feel more at home.”

Her teammates agreed that the kick was key — and unique. “We’re trying something different,” said Lina J., a senior.

The young chefs prepared tirelessly for the competition. Their first recipe idea was an Asian-inspired chicken, but after some experimenting, they set their menu to a Jamaican theme and taste-tested it amongst their peers. Shawlaun K., a junior, said: “I even tried the meal at home, and [my family] liked it! We found a balance of the flavors. It’s just a little bit of Cajun seasoning.”

They worked hard right up until the day of the competition, even sharing thoughts in the pre-dawn hours. “She was texting everybody,” senior Elira C. said, pointing to Mallory.

Their efforts paid off when the judges announced the winners. With hugs and cameras flashing, the CVCA team accepted its trophy. Later, they gathered to reflect on the win. “I’m just so happy right now,” said Elira. Mallory said she was most excited “to see our meal in lunch rooms all over.”

Fuller says that between now and the national competition, there’s still much to do. The team aims to practice outside of school time for up to ten hours a week, prepping for the February 20 celebration and beyond. No matter the recipe, the real ingredients of their meal are totally straightforward.

Fuller says: “This year’s team was adamant that they want more fresh food in school lunches… You can taste the passion in the dish.”

The meal will be celebrated at CVCA on February 20, where team members will present their recipes and share their inspiration for this meal. Win or lose in the national competition, the students are thrilled that their meal will be on plates across Chicago in February. “We’re going to be first in line for lunch,” said Mallory.

Previous
Metrics that Matter: Changing our Nation’s Paradigm on Education and Health
Next
CPS Votes to Require Daily Physical Education for All Students