CPS Votes to Require Daily Physical Education for All Students 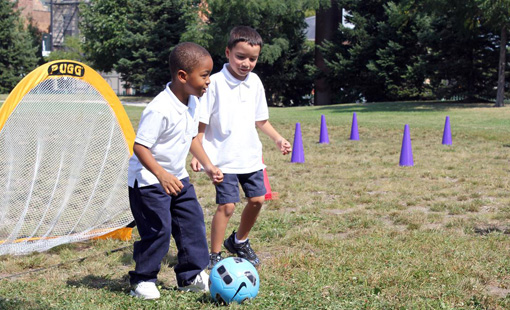 It’s official! Chicago Public School (CPS) students will soon be able to run, jump or play every day thanks to daily required physical education (PE) classes.  The Chicago Board of Education unanimously voted Wednesday, January 22, 2014 at its monthly meeting to adopt a new Physical Education Policy that treats PE as a core subject.

This new policy gives PE the importance it deserves and ensures that students experience the huge benefits of daily physical education. The policy also reverses a 15-year trend of limited access to PE and puts CPS on the path towards compliance with state law, which has long mandated that schools offer daily PE.

Under the new policy, CPS schools will be required to offer 30 minutes of daily PE or 150 minutes a week to K-8 students. High school students will have an average of 42 minutes of PE each day, the equivalent of other core courses. Because CPS will need time to get the policy fully implemented district-wide, it expects to roll out this change over the next three years.

And it’s no small switch, either. Right now, most CPS elementary schools students receive just one period of PE per week, and the majority of high school students are receiving roughly two semesters of PE.

For years, HSC has been an active leader in bringing more physical activity in Chicago schools. We believe these steps toward more PE are a big victory for CPS students — and parents, too. In 2006, the HSC-led parent coalition Parents United for Healthy Schools began calling for recess in all elementary schools, which became fully implemented in the fall of 2012. This past fall, Parents United presented the Board with more than 7,000 signatures from parents across the city in support of daily PE.  In addition, HSC galvanized more than 30 prominent community organizations from across the city who also show strong support for a daily PE policy.

With rates of obesity for Chicago’s students greater than 40 percent and a persistent achievement gap, the benefits of physical activity are vital to the success of Chicago’s children.

We applaud CPS and all those who worked hard to return daily PE to Chicago students.