Three Cheers for CLOCC, Supporter of Go for the Gold! 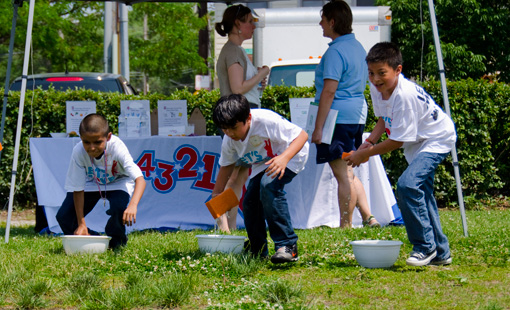 How one partner supported Go for the Gold!

As HSC kicks off its new campaign for wellness in Chicago, Change for Good, we’re looking back at the ways we’ve already made great progress — especially through the three-year Go for the Gold campaign that successfully ended this summer.

We’re particularly excited to recognize the partners who helped make change possible. One of these partners was the Consortium to Lower Obesity in Chicago Children (CLOCC) housed at Ann & Robert H. Lurie Children’s Hospital of Chicago.

CLOCC made fostering healthy school environments a key aspect of its Healthy Places initiative, a $5.8 million project funded by a cooperative agreement from the Centers for Disease Control and Prevention (CDC) through the U.S. Department of Health and Human Services’ Communities Putting Prevention to Work initiative (CPPW).

The initiative, which ran from 2010 to 2012, was launched with a goal to “implement sustainable policy, systems, and environmental changes that address obesity in Chicago by creating healthier environments where Chicagoans live, work, learn, and play.” As part of Healthy Places, CLOCC worked alongside Chicago Public Schools and HSC to increase nutrition education and physical activity in schools by strengthening school wellness policies.

“We felt that there was already strong momentum there with Go for the Gold, and we wanted to support that effort,” says Anna Barnes, School Programs Manager at CLOCC. “For schools, we saw the HealthierUS School Challenge as a tangible incentive they could strive toward. They would be partaking in a national effort that’s connected to Let’s Move! and the USDA.”

One goal of the Healthy Places project was to help at least 25 Chicago schools receive HealthierUS School Challenge certification by September 2012. To achieve that goal, CLOCC integrated Go for the Gold into its strategy and supported four community organizations who in turn worked with local schools. These organizations were Brighton Park Neighborhood Council, Urban Initiatives, SGA Youth & Family Services, and Asian Health Coalition. Each had a one-year grant through CLOCC to support four to five schools in their neighborhoods.

These organizations were also charged with facilitating a healthy school assessment addressing physical activity, healthy eating, the wellness team, and more.  They then created an action plan to successfully apply for the HealthierUS School Challenge.

Barnes says the assessment was an important part of the process because schools could see their strengths around health and wellness, and, from there, realize where they already had  policies and support in place. For example, schools had expanded physical activity during recess,  sent letters home about healthy celebrations and fundraisers, and more.

But the assessment could also help schools see what they needed to work on and obtain support and coaching from the community organization, focusing on one or two strategic areas.

Barnes notes how exciting it was to have school leadership involved and says progress has been sustainable: “Schools formed wellness teams that are still going today, and they engaged both staff and parents to participate. That’s an accomplishment that we’re proud of.”

HSC and CLOCC, strategic partners of the CPS Office of Student and Health and Wellness, also advised CPS as it developed a new wellness policy and a healthy snack and beverage policy. Together, CPS and partners were able to ensure the new wellness policies reached schools and were implemented at the local level.

“We have the third-largest school district in the country,” Barnes says. “It’s really hard to translate information from CPS Central Office down to every local school. We strived to build the capacity of partners so they could help ensure schools were aware of these policies, could implement them in their own unique way, and were promoting healthy eating and physical activity.”

To achieve even more great progress around wellness policies, CPS begins its LearnWELL initiative this year.

Previous
Healthy, Focused & Ready to Learn: CPS on the Success of Go for the Gold
Next
Pathways to Excellence in School Food: Encouraging Breakfast