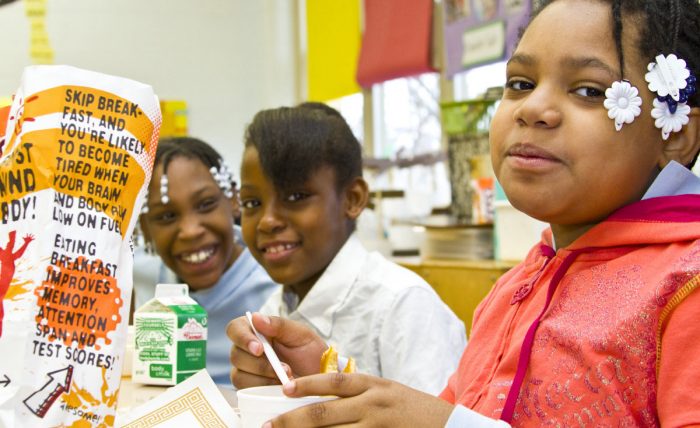 This week is National School Breakfast week and a great time to revisit why breakfast is so important, why we need to fight for the community eligibility provision and how Chicago Public Schools (CPS) is working to make sure its students are fueled for the day and prepared to learn.

Breakfast is important for so many reasons. Breakfast has a strong link to educational outcomes—even more so than other meals—because of the way the brain responds to food after the short fast during sleep. But for the one in five students in Chicago who can’t count on their next meal, eating a nutritious breakfast at home is rarely a reality.

Community eligibility is one of the key strategies driving the increase in breakfast participation in, according to a FRAC analysis of the school breakfast program participation rates and trends in 73 of America’s largest school districts, including CPS. Community eligibility allows districts and schools as a whole to qualify for free lunch and provides free meals to all students. The community eligibility provision was laid out in the Healthy Hunger-Free Kids Act in 2010 and expanded nationally in 2014. CPS adopted the provision that same year, which means all of the district’s students are able to eat lunch—and breakfast—for free.

This provision reduces the administrative burden on the district and families and ensures low-income students are getting the meals they need to fuel learning. Schools across the country are quickly adopting this provision due to its many benefits. Because implementing community eligibility means schools are serving universal free school breakfast, it is a great way to facilitate the adoption of effective breakfast models, such as Breakfast in the Classroom.

Community eligibility is still a new national program and many key decision makers may be unaware of the program and its benefits. The provision has long been a sore spot for Republicans, and many fear the current administration will seek to end the program.

Some assume that providing no-cost meals to all students under the provision is a financial drain. But many of the 18,000 schools around the nation that participate in CEP disagree and consider it a financial win-win. The streamlined program operations resulting from community eligibility provide significant administrative savings in addition to increased participation, both of which support the financial viability of the district’s school nutrition programs.

In honor of National School Breakfast Week, we celebrate the success that’s been made in supporting healthy students and their learning. Community eligibility not only eliminates redundant paperwork and administrative burdens, but it also makes possible substantial gains in meeting vulnerable children’s nutritional needs by providing them with reliable access to healthy meals, particularly the school breakfast program. And, in turn, schools are better preparing students to learn. We can’t roll back the progress that’s been made.