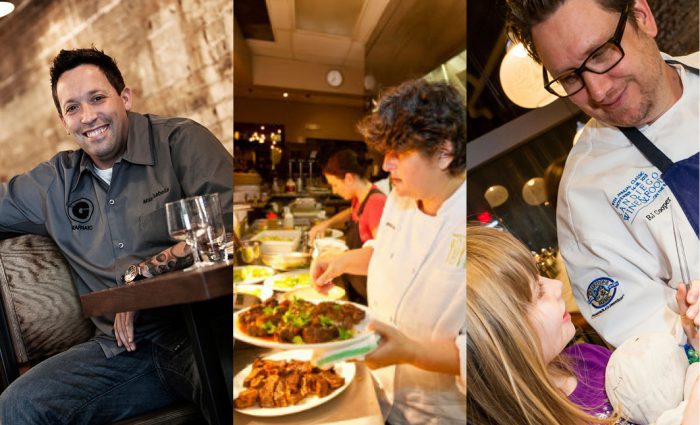 Three chefs from DC’s hottest restaurants are participating on the judging panel of Cooking up Change. Read more about our special guests here!

Three chefs from DC’s hottest restaurants are participating on the judging panel of Cooking up Change, evaluating the delicious, healthy school lunches of eight teams of rising high school chefs from all over the country. We are so excited to welcome RJ Cooper of Rogue 24, Mike Isabella of Graffiato and Jamie Leeds of Hank’s Oyster Bar to Cooking up Change, who are generously donating their time and culinary expertise for our rising chefs. Read more about our special guests here!

Chef RJ Cooper’s memories of school lunch can be summed up in two words: “Cardboard pizza.” The rest of the menu didn’t sound much more promising. “I went to public school,” he says. “It was all mystery meat.”

Things have obviously improved since then, and as a successful DC chef and a parent, Chef Cooper is doing his part to continue to change the school food system for the better, one school at a time. He serves on the advisory board of a DC-based group called Chefs as Parents, founded by fellow local chef Cathal Armstrong of Restaurant Eve. He says the goal of Chefs as Parents is to work with schools to encourage and implement key changes to support healthy and nutritious meals, such as scratch cooking and farm-to-school programs.

Chef Cooper says having students raise their voices to improve school food is important because students know what they want to eat. He’s intrigued by many of the innovative student dishes, but what really excites him is the opportunity for students to learn how to effect change. “If the kids keep voicing their opinions and producing change on their level, the people in the power ties can change the system,” he says. “That to me is what’s exciting, and to see them try a craft that’s still so new to them and do exciting things.”

As dynamic as the contest is, Chef Cooper wants students to remember that through it all, winning isn’t everything. “Cooking isn’t about competing against other people, but competing against yourself to produce a product that will tantalize, and make people want to come back,” he says. “You also want them to take away the dedication to the craft and something that will give them a long-term future, and be determined to make it happen.”

And how will these student chefs make this happen, you ask? According to Chef Cooper, the key to developing as a chef is simply “being patient.” No one walks into a kitchen knowing everything. But if you work hard and keep the drive alive, he says, the culinary path will reward you in a lot of ways.

Chef Cooper describes his restaurant, Rogue 24, as a “culinary think tank.” The James Beard Award winner and his team draw inspiration from many styles, techniques and corners of the globe to produce creative dishes for this Nouveau American restaurant. “We have no boundaries and no roadblocks in our creativity process,” he says. “And for that, it’s a total collaboration of craft between all the chefs that work with me.”

Our Cooking up Change student chefs are competing to become Top Chef of the cafeteria, and adding to the excitement is a visit from a real life Top Chef! Mike Isabella, best known for his delicious dishes at DC hotspots Zaytinya, Bandolero and Graffiato, competed on the hit Bravo reality cooking competition twice and proved to be a fierce competitor both times, taking the Runner-Up spot on Top Chef All-Stars in 2011. Isabella said he was excited for the opportunity to volunteer as a judge for Cooking up Change and help the next generation of chefs advocate for healthy food and healthy futures.

“I think it’s very important for the kids to have a say and a voice and an opinion, because they’re the ones eating the food, and they’re the next generation who can help make things better,” he says. “Me, being older and having my own restaurant, I’d really like to see what they think about it and see what they’re doing to make it better.”

Although winning isn’t everything, competitions are fun, and Chef Isabella enjoys how they bring people together, to see different chefs’ visions and try new foods. As a veteran of quite a few contests, however, he does acknowledge that any contest comes with a lot of pressure. The best way to conquer this, he says, is to believe in yourself, stand by your dishes and always taste your food.

“The stress levels are super high when people are judging your food,” he says. “You’re always worried and it’s hard to control that. Every competition that I go on, I still have that feeling. But you have to believe in yourself. Do what you would do on any normal day cooking. The first time on Top Chef, the nerves got to me, and the second experience, I let the show come to me instead of me coming to the show. I was calm, I was focused and the food was a lot better.”

Chef Isabella says he hopes the contest will be a learning experience for the participating students, and that they will gain a lot from seeing other chefs’ visions and styles. His advice to the competing chefs is simple and true: Keep your head up, ask a lot of questions and work hard.

In addition to running Graffiato and judging Cooking up Change, Chef Isabella will soon add two restaurants to his culinary kingdom: Greek restaurant Kapnos, opening in late June, and G Sandwich, an Italian sandwich shop by day with a tasting menu by night, opening in July. “We’re trying out different designs and techniques, giving people variety and something interesting,” he says. “I’d love people to come in and see what we’re doing.”

When Chef Jamie Leeds was in school, she and her friends used to sneak out during lunch periods and go to a nearby fast-food restaurant because eating lunch at school was not a particularly pleasant experience. Now, Chef Leeds is helping culinary students rewrite the recipe for school food. “I think it’s always nice to see what young kids are doing these days,” Leeds says. “I like to be able to be a part of advancing a young person’s career.”

Chef Leeds is at the helm of one of DC’s top restaurants, Hank’s Oyster Bar. Leeds says the restaurant is homage to her late father, and features fresh seafood with a menu that changes daily. A self-taught chef who worked her way up the ranks, Leeds has plenty of advice for rising chefs who are flexing their culinary muscles in this contest and want to further their careers. “I would tell them to research and find a chef that they think that they have an affinity to, the kind of food that they want to cook and try to get a job at that restaurant, at whatever level,” she says. “Keep your head down and work as hard as you can.”

She also says she hopes the contest will inspire these young chefs to be more mindful of food, the cooking process and being aware of procedures and ingredients and factoring health into all of these. “You’re doing something very personal, making something someone’s ingesting into their body,” she says. “I think this will help gear their minds more towards that.”

In addition to being a chef, Leeds is also a parent, and is working to instill lessons about healthy eating and good food in her 10-year-old son. She’s hoping the competition will inspire more delicious dishes for her family. “I’m looking for some good ideas for my son’s lunch,” Leeds says. “I’m very curious to see what the kids come up with.”

We thank Chef Leeds, Chef Cooper, Chef Isabella and all the amazing judges for donating their time and support to Cooking up Change! To learn more about the rest of the judges and the competition, and how you can get involved and join the conversation about school food, keep checking back with our blog and be sure to visit CookingupChange.org.