Meet Your 2013 Cooking up Change Teams! 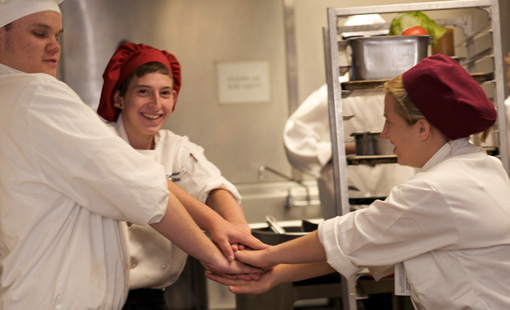 Next Monday, eight teams of talented student chefs from around the country will chop, slice and cook up new recipes for school food at our national Cooking up Change healthy cooking contest. Today, we wanted to give you a chance to meet the teams.

Next Monday, eight teams of talented student chefs from around the country will chop, slice and cook up new recipes for school food at our national Cooking up Change healthy cooking contest. Today, we wanted to give you a chance to meet the teams. And be sure to cheer on your favorites on Facebook and Twitter!

The Chicago chefs kicked off a season of exciting regional competitions last fall, and the team from Washington High School brought the house down with their more healthful takes on popular cafeteria favorites and street food staples, chicken nachos and elotes.

With some key ingredient substitutions (dijon mustard instead of mayonnaise, for example) and roasting for flavor, the team made delicious and healthy interpretations of popular lunchroom favorites. The judges and the crowd at the Bridgeport Art Center loved their recipes, which were served in Chicago Public Schools back in January. Now the team is getting ready to take on D.C.

“I'm so proud of my school,” Nava said after the regional competition in November. “People will know good things about our school now. They'll know Washington won Cooking up Change. We were underdogs; now we're first-place winners.”

For the student chefs from Bruce Randolph School, the idea began with a simple sandwich. The sandwich became a panini, which became a beautifully presented wrap filled with chicken, cheese and veggies, presented in this manner so diners could see all the different colors and layers. Not only did the judges love their colorful sandwich and innovative sides like a jalapeno-infused peach crumble, but their peers enjoyed the chance to sample them as well when their meal was served in Denver Public Schools.

In addition to taking home a regional win and the opportunity to travel to D.C. for nationals, the student chefs from Denver will carry with them some very important life lessons about health from their culinary mentors. “Our instructors taught us to really think about what we're buying and what we're eating,” team member Jennifer Esquivel says. “Like, don't just pick something out. Look at the label. Think about what you're eating or making for your family. I showed my mom how to read labels, and together we started doing that at home.”

And, for at least one team member, the contest launched what will hopefully be a lifelong love of cooking. “Don't be afraid to get out there to make new things,” Esquivel says. “One of my team members wasn't even interested in cooking when we started. She hated it! Now she loves to cook.”

Brandon Antonelli first developed his passion for cooking watching culinary shows on television, particularly those of chef Gordon Ramsay. His partner, Bria Pascua, found her love for the culinary arts picking up over the years. Their culinary teacher encouraged them both to try out for Cooking up Change.

Once the student chefs had teamed up, they chose a dish they said was “trending”: fish tacos. “We were looking through magazines (for ideas) and my teacher was telling me that no one had really used catfish yet,” Pascua says. Adds her partner, succinctly, “Everybody likes tacos.”

In the end, their innovation and careful preparation paid off, as Antonelli and Pascua’s catfish tacos brought home the victory. Both team members are excited for the next phase of the challenge at nationals, and will be hoping to take home Jacksonville’s second national Cooking up Change title in three years. The 2011 winning team has continued to make an impact in the national conversation about school food, recently serving as judges for the Partnership for A Healthier America’s Great American School Lunch Challenge, where they evaluated school lunches from all-star chefs Anne Burrell and Jose Garces. The 2013 winners, too, seem very enthusiastic about weighing in on this issue. “[Cooking up Change] shows that healthy food in schools as possible and that it’s not as bland as everyone thinks it is,” Pascua says.

Los Angeles is one of two cities that are new to the competition this year, and excitement was certainly in the air after their first regional competition. When the winning student chefs from West Adams Preparatory High School returned to school after the competition, their peers were waiting for them. A shout of “We won!” as they walked through the doors was met with thunderous applause from their peers.

Esther Zegura says she was excited to have an impact not just on her school and represent her peers, but also to make positive changes at home. José Landaverde agreed, adding that he was excited to have the opportunity to make an impact. “I wanted to be a part of the competition to be part of a change, not just in California, but all over the country,” he says.

But before they got to the main event, Zegura says, they had to compete with their peers and come up with a menu. She said one of the biggest challenges was creating a balanced menu from only 10 ingredients. Maribel Sandoval said their menu was voted on by their peers before being chosen to represent the school and was selected for its originality.

With innovation, teamwork and persistence on their side, the team from West Adams won the day, and enjoyed every second of it. “Working with my team was the best,” Zegura says. “It was all so exciting. I was speechless.”

Student chefs Tavarious Cleaves and LaKeidra Greer both grew up with cooking ingrained in  them from a young age. As children in the great American food city of Memphis, they watched their grandmothers in the kitchen and honed their crafts helping with family recipes. Now, as students in the culinary track at Craigmont High School (home of the Chiefs), they stepped up to the challenge of creating fresh, healthy school meals at the first-ever Memphis regional Cooking up Change. Cleaves and Greer won the competition with a delicious and healthier take on Southern barbecue classics.

“In Memphis, barbecue is a way of life, and living in the South all my life, that’s where my food comes from,” Cleaves says. “I like to make Southern comfort food, but creative and out of the box. You think of fried chicken and greens and sweet potatoes, but I wanted to make them interesting.”

The team faced a number of challenges in working together, most notably that Greer came into the competition late after another student chef opted to drop out of the competition. They had to quickly learn to communicate and work with each other. But communication, creativity and passion ultimately paid off, as Cleaves and Greer took home an exciting victory. Cleaves said when the winner was announced, his face had tightened up from smiling so hard. Both Cleaves and Greer have their eyes on a win in D.C.

For team members Carlos Ortiz and Cecilia Magana, this competition was especially important. Both competed in the local Cooking up Change last year, but it was another team from Valley who went on to national glory while their team took second. “What I was told was that we were one point away,” Magana says. “I knew I could make it and hoped for the first place.”

With determination and some key improvements, the two second-place finishers from last year returned ready to work. Ortiz says he learned how to be a more effective communicator. In the end, their hard work and persistence paid off.

Excitement is in the air for the winning team from Valley, and the students have their eyes on bringing home back-to-back national titles. But even more than that, they hope to make an impact and spread the word about improving school food. “Our teacher is depending on us,” Amezcua says. “I'm planning to achieve at nationals…to go to our principal and tell him to change school food. We're really tired of junk food in our schools.”

When Clarese Mathews and Aretha Brown of Beaumont High School’s Junior Chefs found out they won the St. Louis leg of the competition, they said they both reacted with tears of joy. Brown says: “We’re an inner city school and people expect us to be underdogs. When we won, I was so shocked, but in a good way.”

Even if they thought they were underdogs, the judges loved their tasty BBQ baked chicken and scrumptious sides. Brown said the team chose their dish as a way to take a popular and easy-to-prepare meal and make it healthy. Added her teammate, Mathews, “I know children love a lot of meat. The most common meat is chicken, so we figured, why not do baked barbecued chicken?”

The student chefs first developed a passion for cooking from watching their families and learning hands-on. Their mentor in the culinary program told them about Cooking up Change and piqued their interest. “I thought, ‘It’s gonna be fun, we’re not going to win, but it’s going to be fun,’” Brown said. “We were practicing and practicing, and then we started feeling confident.”

At the competition, even with nerves running high, they made sure to stay focused. Mathews says: “My team stayed confident throughout the competition and helped each other. I enjoyed the teamwork and helping out other people.”

Anna Simeonides has always loved to cook, but in her family, cooking healthy is also a necessity. Simeonides says she really got into cooking when her brother was diagnosed with a number of health issues and food allergies. She began working with special flours and vegan cooking. “I am all about eating healthy,” she says. “You feel so much better. I think kids need to realize what a difference that makes in your life.”

Simeonides and her teammate, Sophie Randleman, who call themselves “The Kitchenettes,” won the Winston-Salem leg of the competition with their delicious meal of Tenacious Turkey Chili with Sunshine Fries and Apple Crunch Bowls. Their idea was “comfort food with a healthy twist,” dishes that would be satisfying and memorable, while still focusing on health.

“We wanted to come up with something unique and healthy instead of just putting a salad on the plate and saying, ‘Here, eat this.’” Randleman says.

After an action-packed Winston-Salem regional competition at The Career Center, the Kitchenettes have high hopes for their trip to nationals. Both chefs are excited about the opportunity to continue to hone their skills while learning more about healthful cooking. “I just want to go in there with a bang and learn something from it,” Simeonides says. “I want to keep practicing my culinary skills.”

HSC sends huge congrats to all teams for making it so far — we'll see you in D.C.! And don't forget: Follow along on Facebook and Twitter!

Previous
Help Us Cook up Change: Invite Your Legislator to Lunch!
Next
Cooking up Change With All-Star DC Chefs