I believe that kids will eat tasty
fresh food on plenty of occasions — but that they will especially love
(and devour) it when they take pride in making it. And it just takes a
few extra steps when you're working with a three-year-old.
With
a little prep, making lasagna is a kid-friendly activity because it's
about getting your hands in food and spreading it around. It's a
universal fact that most kids (mine excluded on this particular day)
love getting their hands dirty. So why not do it with some sauteed
spinach?

While this is a multi-step recipe, I tried to keep it
simple. My basic strategy is to caramelize veggies, layer them with
cheese and no-boil noodles (gotta keep it easy) and cover with some
tomato sauce.

I'm no expert on lasagna — so to all my Italian
friends out there, please be easy on me. I'm not claiming to be
authentic. But it's tasty, and a great way to get kids involved with cooking.

2 cups mozzarella cheese
Fennel
Oregano
Black pepper
Salt to taste
Olive oil
My
key to a good veggie lasagna is to saute each layer of veggies ahead of
time and spice each layer separately. This accomplishes three things.
First, it reduces the water content so you don't end up with a watery
goop of noodles and mush. Second, you want to condense the flavors and
the natural sugars in the vegetables. Third, by lightly salting and
spicing each layer, you end up with every layer having a distinct and
delicious flavor.

For each step below, I add salt to taste.
This reduces my risk of adding too much salt later. And you can do this
the night before you assemble. So, my pre-prep is:

For
the sauce, you can just open a jar of your favorite sauce. Usually it
will need some black pepper and fennel. I also added some dried
mushrooms for flavor and texture.

Then let the fun begin: invite you kids to get their hands messy with the layers of veggie goodness.

One warning: this video was edited with the grandparents in mind, not
the general viewing public. Unless you are related to Henry or
extra-fascinated by lasagna, you'll probably get the idea within the
first 30 seconds. . .

Previous
“Healthy Bodies and Healthy Minds Go Hand in Hand:” Sen. Durbin on School Food and Learning, in the
Next
HSC Recognizes Innovations for Wellness & Environment 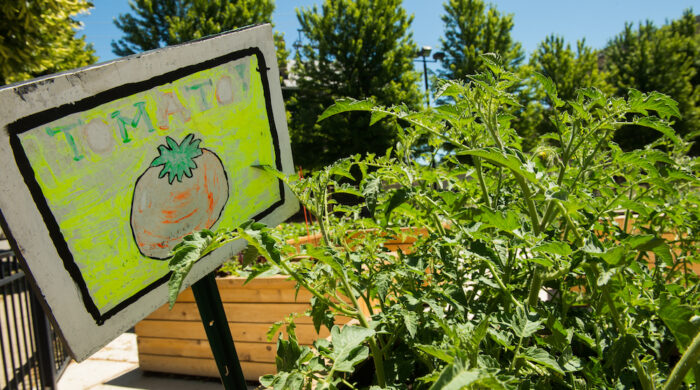