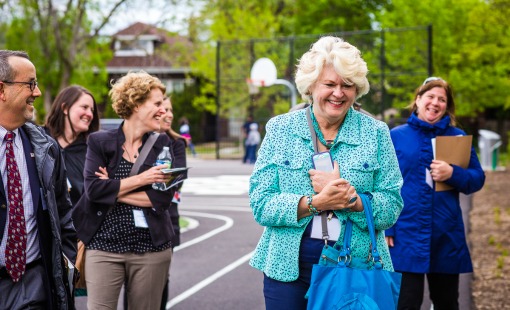 We were thrilled to have Dr. Gail C. Christopher, vice president for policy and senior advisor at the W.K. Kellogg Foundation, open the National Green Schoolyards Summit here in Chicago on May 12. Dr. Christopher set the tone for the summit by talking about the restorative benefits of nature for people of all ages and that fact that in our society, structural racism has led to an inequitable distribution of resources at all levels, including open space and opportunities for families and children to be physically active. With so much research coming out about the long-term health effects of exposure to adversity, it is more important than ever to prioritize green schoolyards and healthy school environments.

Placing the green schoolyard movement in a broader context helps galvanize the work. Green schoolyards aren’t just about nicer playground equipment or gardens or turf fields; this work is based in social justice and racial equity and the full range of community benefits that come from a cohesive approach to schoolyard development. “I believe this work has huge potential to help mitigate the exposures of a nation that has inequity and inequality built into it,” Christopher said. “This is one of those strategic interventions that can make such a difference in the lives of the children it touches.”

She added the green schoolyard movement to the list of what she calls the “common sense” revolution that we need to have in this country. “Giving urban children the opportunity to spend time in nature should be part of every school system’s priority,” she said.

The two-day (May 12-13) National Green Schoolyards Summit brought together leaders and experts from across the country to share and learn about several different types of green schoolyard models, and to explore innovative partnerships and funding streams that support the development of green schoolyards. We also heard about the impact these schoolyards are making — from improving standardized test scores, to increasing teacher satisfaction and retention, to managing stormwater and increasing physical activity — as proof that green schoolyards are both school and community assets.

The summit was also an incredible opportunity to showcase Space to Grow, the green schoolyard initiative we launched in Chicago last year in partnership with Openlands. In October, we debuted our first Space to Grow schoolyards at four Chicago elementary schools, and work is currently underway on six more to open this fall. By navigating the intricacies of a large urban city like Chicago and tapping creative sources of funding, Space to Grow has captured the attention of other cities and organizations from across the country.

Thanks to the early success of Space to Grow and its unique program model — which brings together leadership and funding from three public agencies: Chicago Public Schools, Chicago Department of Water Management and the Metropolitan Water Reclamation District of Greater Chicago — Chicago has joined this important movement.

With exciting schoolyard projects taking place in cities across the country — from Berkeley, California; to Houston, Texas; to Chicago; to New York City; and lots of cities in between — a national conversation was an important step in helping this important work that does so much to improve our schools and communities become a national priority. And we’re going to keep the conversation going. A full report of the summit that will include learnings and outcomes from our time together in Chicago, and next steps for the green schoolyards movement, will be available in August.

Special thanks to W.K. Kellogg Foundation and Grantmakers In Health for making the National Green Schoolyards Summit possible, as well as to our partners from Openlands and the Children & Nature Network for their help in organizing the summit.