Growing up with Cooking up Change: an Interview with David Blackmon 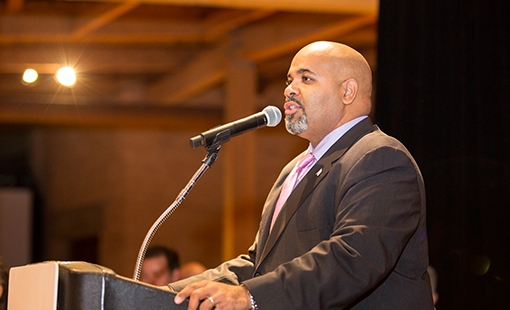 Although David works closely with the schools leading up to the competition on Oct. 29, he tries to learn as little as he can about the exact recipes. He loves the surprise. “I take advantage of the Cooking up Change event to be surprised, spoiled in the moment. If we have 16 schools, I have 16 different surprises to taste. That’s what I enjoy most about the event.”

David knows the completed meals often start as a small idea and grow from there. “I look forward to the creative teachers, the industry coaches, the students and the collaborative menu they come up with together,” David says. “It’s always something to watch the meal come together from an idea that one or two students had.”

After the winning team is announced, David works with that team to refine their preparation and presentation before the Cooking up Change National Finals in Washington, D.C. He also works with the team on the many events leading up to the national finals: a district-wide school lunch celebration, lunch with the Mayor of Chicago, presenting to the Illinois State Board of Education and presenting to the Chicago Board of Education.

David was able to accompany the winning team to Washington, D.C., in June 2015 to experience the national finals for the first time in several years. Going to the White House and chatting with the executive chef there “never gets old” and it’s always great to see how excited the students are. David really enjoyed that the students were able to meet with U.S. Representative Danny Davis and his staff to share their message about why healthy school food matters.

Forming these messages about healthy school food helps students realize that they are the customer. “If you can get enough students to demand change, change might happen,” he says.

If you’re in Chicago, please join us on Oct. 29 to listen to what these talented young chefs have to say about healthy school food and taste their delicious meals. All proceeds from the event go toward our mission to improve school and student health in Chicago and across the country. If you are from outside of Chicago or cannot attend, you can make a donation, bid in our silent auction and enter the grand raffle.

The Chicago competition is the start to a series of nationwide competitions that will take place throughout the school year. The winning team from Chicago will join other winning teams from across the country when they compete at the Cooking up Change National Finals in Washington, D.C., next June. We’ll announce the full Cooking up Change 2015-2016 schedule soon!