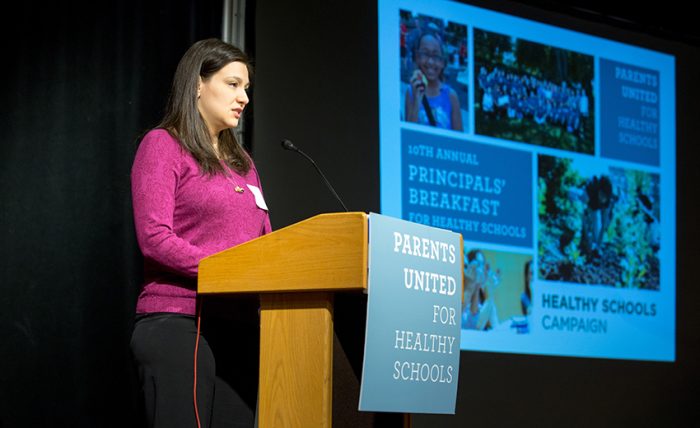 Students from the school, their parents and community members took part in several harvests and were able to take produce home—fresh from the ground. “At one point, kids were literally carrying carrots from the dirt to the bathroom to wash them off and then they were eating them in the garden,” says Cristina Hernandez, one of the parents spearheading the school’s gardening efforts.

In addition to helping out with the garden—which she started almost immediately after her daughter started at the school five years ago—Cristina has also been an active member of Parents United for Healthy Schools, our coalition that brings together parents, educators and community leaders from across Chicago. We formed the coalition in 2006 out of concern for the skyrocketing rates of childhood obesity in Chicago and the growing health disparities in our city.

A leader that has flourished within the program, Cristina has had an impact at Greene that has been both deep and varied. In addition to working with the garden, Cristina also worked on transforming the school’s fundraisers—swapping an ice cream social for a smoothie party. “The look on the kids’ faces when they try a green smoothie and you tell them what’s in it is great,” she says.

Starting with the last school year, Cristina’s three children transferred to James Ward Elementary School so they could all be together, but Cristina did not leave Greene behind. She transitioned from a parent role to a community role and joined the Local School Council as a community member. “I didn’t want to leave the school,” she says. “It is my neighborhood school. I just wanted to see things through.”

Transitioning to a new school hasn’t been without its challenges, but Cristina is making inroads. While James Ward has a wellness team, it’s composed of only teachers right now. Christina is hoping to start organizing parents around fundraising, which is a big deal with the new wellness policy requirements, she says. She’s hoping to meet with the wellness champion in April to start planning.

The lessons she’s learned from working to make school healthier has also informed her family’s own lifestyle. Her children have developed a taste for healthy food. Her 7-year-old son commented the other day about how he didn’t want to drink sports drinks because of all the excess sugar they contain. Cristina is glad that her children are learning to read food nutrition labels at such a young age. “I just hope it sticks with them as they grow up so they can make healthier choices,” she says.

Previous
Green Schoolyards: A Growing Movement
Next
Now Recruiting for the Fit to Learn 2016-2017 Cohort