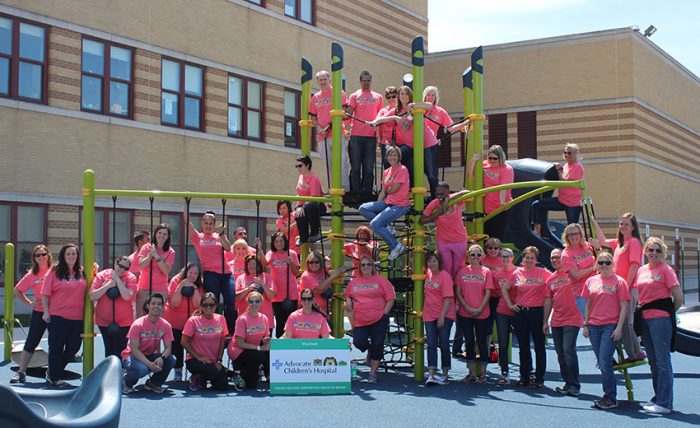 When a child ends up in the emergency room in the hospital, it’s often because they have a mismanaged chronic condition. Oftentimes, the incident that landed the child in the hospital is treated but underlying issues concerning the condition—poor air quality at school, for example—aren’t addressed. But more and more, healthcare organizations are recognizing they can’t operate in a silo. They’re also realizing schools are a great way to reach children, especially children of color in low-income areas.

One organization truly embracing that idea is Advocate Children’s Hospital, with campuses in Oak Lawn and Park Ridge, Ill. In addition to broadening their definition of community and how they interact with the community, more than 100 members of its leadership team, which regularly gives back to communities through health-related projects, volunteered at Orozco Community Academy and Schmid Elementary with our Space to Grow program.

Space to Grow is an innovative partnership led by HSC and Openlands to transform Chicago schoolyards into centers for outdoor learning, play and engagement with nature, while also addressing neighborhood flooding issues. Schmid and Orozco are two schools that have each received a $1.5 million schoolyard transformation through the Space to Grow program, which is supported by capital funding and expertise from Chicago Public Schools (CPS), the Chicago Department of Water Management and the Metropolitan Water Reclamation District of Greater Chicago.

The hard-working volunteers at Schmid worked on weeding the large rain garden of native plants that had been taken over by an aggressive weed, as well as spreading new mulch in the garden. Volunteers at Orozco ran a health fair for the students, organized the library that had fallen behind in upkeep because the school has not had a librarian in nearly three years, painted the school’s Peace Room which is an integral part of the school’s restorative justice philosophy and organized several storage areas that were in dire need. All of these activities—although they might not seem like it right away—support healthy students and student success, says Dr. Frank Belmonte, Vice President of Population Health.

“I think we silo all of these things so much, but in reality, we’re all working toward one common goal: We all want children to succeed,” Belmonte says.

Volunteers worked hard, got their hands dirty in the gardens at Schmid and painting a room at Orozco. The room was taken from a drab grey to a tranquil mint perfect for the room’s new use: a peace room. Assistant Principal Amanda Pyrce says the room will be used for talk circles and other methods of working with troubled students that doesn’t involve detention.

At Schmid, volunteers spent hours in the sun pulling weeds and spreading mulch which ensures that the school’s native plants can continue to thrive and function as a rain garden which ultimately helps address neighborhood flooding issues. As the volunteers at Schmid were pulling weeds, teachers and students marched past the school grounds during an anti-violence protest and witnessed the beautification process in action. “It has been incredibly inspiring working as leaders together and knowing that we’re making such a difference in the community,” says volunteer Karen Harkovich.

We’re so thankful to have Advocate as a partner and for all of the important work they did for the schools last week. Advocate also volunteered two years ago to help plant thousands of plants at Morrill Elementary. And we hope to see them next year, too!