Liliana Hernandez Addresses Health Disparities at Home, at School and Across CPS 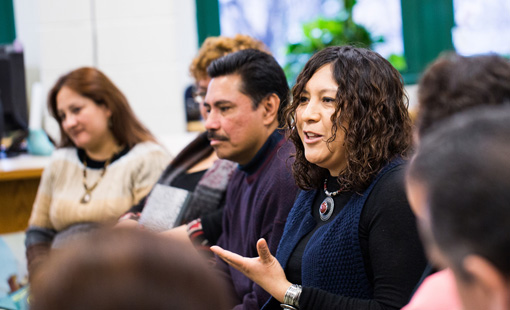 Parents can be vital changemakers for school wellness. They’re heavily invested in their children’s success, they’re on-the-ground observers of the everyday impacts of school policies — and their resolve can make all the difference. In Chicago Public Schools (CPS), daily physical education classes will soon be required for all students. It’s progress that couldn’t have happened without the dedicated members of HSC’s Parents United for Healthy Schools.

One parent, Liliana Hernandez, was especially instrumental. But six years ago when she first started learning about the link between health and academic success, the way forward was anything but clear. Every day, she experienced the real-life repercussions of statistics showing that health disparities disproportionately affect her community. More than 60 percent of the city’s Mexican-American sixth graders were (and are) overweight or obese. Yet she had only a vague notion that her children’s school could play more of a key role in supporting wellness.

The real spark happened when she met Jovita Flores at her children’s school, Eli Whitney Elementary School. Flores was there talking about organizing wellness teams.

Flores is the manager of Parents United for Healthy Schools, HSC’s coalition of parents from across Chicago that advocates for healthy school environments. The coalition was formed in 2006 out of concern for the skyrocketing rates of childhood obesity and the growing health disparities among the Latino and African-American communities in Chicago. As she began to learn more from Flores and become an active member of Parents United for Healthy Schools, she began to make the connection between the issues faced by her family and the issues faced by her entire community.

A school-based wellness team is a group concerned with the health and well-being of students and staff. WIth as few as three and as many as 20 members, the teams plan and implement school initiatives that promote a healthy school culture and learning environment.

She also graduated from Parents United’s leadership institute and became a regular face at all meetings.

Simultaneously, as her knowledge and skills grew, her family’s health began to shift. She switched to healthier substitutes for red meat and pork. Now her kids have fewer stomach problems, and her husband — who initially expressed skepticism — feels better, too. For herself, Hernandez began controlling high blood pressure with a low-salt diet and a daily dose of high-energy Zumba.

Fueled by firsthand knowledge and Parents United’s leadership training, she’s become invaluable to broader efforts. She’s been part of Parents United advocacy that advocated for breakfast in the classroom and healthier school menus; she helped start an exercise club at school; and more. Before advocating for PE, Hernandez was part of the Chicago Public Schools Recess Task Force, which was responsible for bringing back recess for all students in the district.

She says with certainty: “Kids need to be moving around, they spend too much time sitting in a classroom all day.”

With support from Parents United for Healthy Schools, she spearheaded the collection of 1,000 signatures — all within a month and a half. She and other wellness team members stood outside the school and talked to parents. They went to other schools and talked to those parents. They visited the laundromat, the karate studio and the secondhand shop. They even talked to young people who weren’t parents yet, reminding them that when they had children, the issue would affect their families too.

Despite her success in galvanizing 1,000 supporters for PE, she doesn’t always see herself as a leader. In fact, she says, “My friends say I’m a leader, but I say that I’m just a mom who wants to see changes.”

Ultimately Parents United members collected more than 7,000 signatures in support of daily PE and presented them to the Chicago Board of Education, which passed the policy in January. Hernandez is thrilled that the policy passed. It’s a great step. But in some ways, even though much groundwork has been laid, it’s still a first step. “Now the challenge comes,” she says. “Now we have to work.”