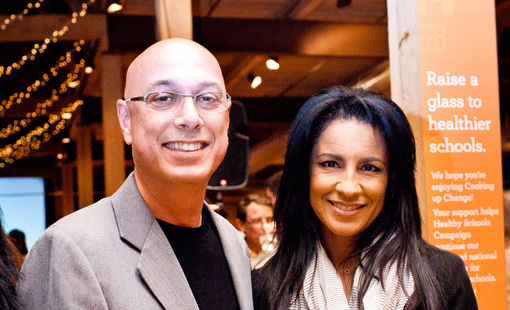 Hear why Cooking up Change’s Contest Chair, Chef Randy Zweiban, is a big supporter of the event!

Most days, you can find Chef Randy Zweiban serving up tuna tacos, masa flatbreads and other Latin-influenced delights at Province, his chic, pink-accented restaurant in the culinary hotbed of Chicago’s West Loop. But over the past several years, this executive chef has been supporting the next generation of Chicago’s (healthy) culinary superstars at Cooking up Change.

Chef Zweiban first became involved with Cooking up Change several years ago and was instantly enamored with the concept of the student healthy cooking contest. He hosted events at the restaurant and later served as a chef mentor for the team from Clemente High School. His involvement in the contest continued to grow, and for the past two years, Zweiban has served as a contest chair. In the months leading up to the contest, Zweiban works tirelessly behind the scenes, helping with recruiting and hosting contest-related events at Province.

As a mentor, Zweiban worked with a small team of students to offer a professional chef’s perspective on their meals and help generate new ideas. He says Cooking up Change is to culinary students what a big game might be to student athletes or a tournament to members of the debate team, an experience that encourages students to explore their passions and work together as a team.

There are major benefits to participating in the contest, he says. The first is that students develop their passion for the culinary arts and gain real-world experience working alongside seasoned teachers and industry veterans. In creating a delicious, healthy school lunch under conditions similar to those of school food service, Zweiban says students learn a lot about the industry and its challenges, while also “spreading the gospel of healthy eating.”

One of the key aspects of the contest that keeps Zweiban coming back to Cooking up Change is the dedication of everyone involved in the contest. He says he greatly admires the culinary instructors and volunteers who prepare students for the big day. “It’s an extracurricular activity for them,” he says. “They work really hard, and to see their passion is very rewarding.”

Chef Zweiban has watched the contest grow and evolve, expanding to more than eight cities across the country. He finds Cooking up Change in Chicago has grown better and better each year. But the most exciting aspect for him is the important learning opportunity for these talented young chefs.

“I think it’s important that people of all ages are eating healthier and understanding food,” he says. “This is a great way to help educate our younger generation and empower them to share what they learn with their friends and share it with their families.”

Join us on November 7th for Cooking up Change Chicago! Tickets are available now.