Meet the Winners of the First-Ever Cooking up Change Memphis Competition! 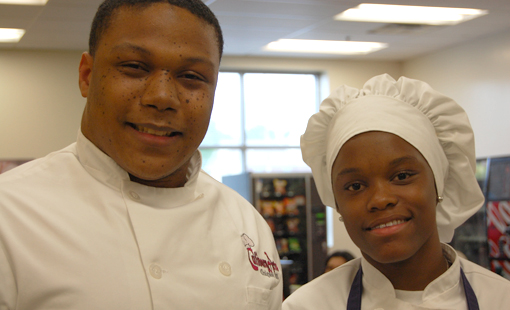 Congratulations to the winners of Cooking up Change in Memphis!

Student chefs Tavarious Cleaves and LaKeidra Greer both grew up with cooking ingrained into them from a young age. As children in the great American food city of Memphis, they watched their grandmothers in the kitchen and honed their crafts helping with family recipes. Now, as students in the culinary track at Craigmont High School (home of the Chiefs), they stepped up to the challenge of creating fresh, healthy school meals at the first-ever Memphis regional Cooking up Change. Cleaves and Greer won the competition with a delicious and healthier take on Southern barbecue classics: BBQ chicken tacos, a loaded baked sweet potato and fruit salad with yogurt.

“In Memphis, barbecue is a way of life, and living in the South all my life, that’s where my food comes from,” Cleaves says. “I like to make Southern comfort food, but creative and out of the box. You think of fried chicken and greens and sweet potatoes, but I wanted to make them interesting.”

Cleaves says his creative process for cooking involves a lot of crowd-sourcing. He takes notes on what other people like and adds his own ideas about flavor and how to make them healthier, the latter a particular challenge. The team took elements of Southern cooking they and their friends and classmates liked and switched up some of the ingredients or procedures.

Cleaves says: “Me, I like spinach. I like to incorporate spinach in a lot of my dishes. And with the BBQ taco, I thought, everybody loves chicken, so let’s add some vegetables to make some good color and make great seasonings to give it some flavor.”

The team faced a number of challenges in working together, most notably that Greer came into the competition late after another student chef opted to drop out of the competition. They had to quickly learn to communicate and work with each other. Then, they had to strategize about how to incorporate all their ideas and make them healthy, plus keep the food warm before serving. No easy task, even for the most experienced cooks!

But communication, creativity and passion ultimately paid off, as Cleaves and Greer took home an exciting victory. Cleaves said when the winner was announced, his face had tightened up from smiling so hard. Both Cleaves and Greer have their eyes on a win in D.C. For Greer, the win was particularly special because this is her first year in the culinary track, unlike Cleaves, who is a senior. She says the win was a big validation for her in pursuing this path.

“It brought a lot of joy to my heart,” she says.

Student chefs from three other teams representing two Memphis high schools participated in the city’s Cooking up Change competition, and all of them did a fantastic job. Three cheers for the following students for representing their schools and their city with some delicious-sounding dishes: