One-Third Local Food: How Dallas Independent School District Did It 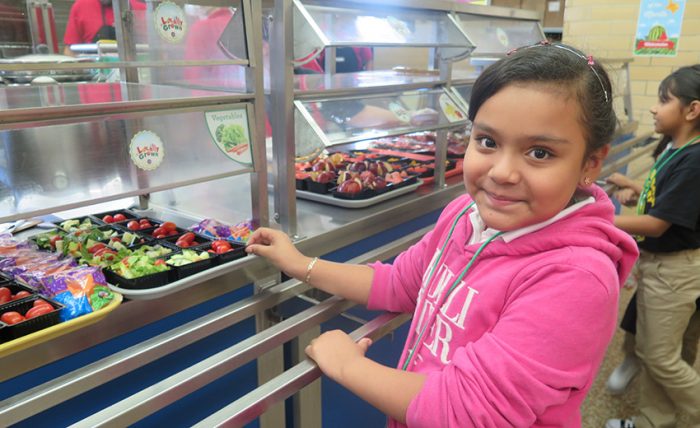 A few years ago, Dallas Independent School District—home to 160,000 students in 227 schools—made a commitment to source and serve more local food. At the time, only 5 percent of the food served in the district’s school meal program was from Texas, says Margaret Lopez, the executive director of the district’s Food & Child Nutrition Services.

Now, Lopez estimates 35 percent of the food served in the district—including 100 percent of the milk—comes from the state of Texas. It wasn’t an easy task, but it was doable, Lopez says. “It just takes focus,” she says. “It’s about letting people know that’s what you want and going out to seek it.”

But the work of integrating local food into the school meal program doesn’t stop at sourcing. “There are several prongs in the promotion of local food,” Lopez says. “The first is sourcing and buying local and reaching out to develop those relationships. Another one was educating students about the farm and about the products that they’re eating. The third phase was supporting school gardens as an experiential learning opportunity.”

As for educating students, the district has a “Harvest of the Month” item, which features a different item each month. The district provides fact sheets to teachers for them to incorporate into their lessons as they see fit. Included in the sheet is information on where the product was grown, the history of the farmer who grew it and nutritional information about the food item. The district has also created Farmer Trading Cards that feature the farmers who supply the districts. They’ve even brought farmers into schools to interact with students. In the cafeteria, the district has Farm Fresh Fridays and features other local products that might not be the Harvest of the Month item.

This education piece helps students become acquainted with and excited about food items they might never have tried before. “Students’ repertoires of fruits and veggies can be pretty limited,” Lopez says. “For instance, new red potatoes and sweet potatoes. You’d think those are fairly common, but that’s a little different than a french fry, for sure.”

One of the most popular taster items was a dish with roasted sweet potato, butternut squash and beet. “That was a little surprising to me,” she says. “It was the first time a lot of the students had tasted a beet.”

The district was fortunate to receive an implementation grant that really allowed them to kickstart this program, Lopez says. The district is also fortunate that the growing season in Texas is much longer than in Chicago, for example.

One of the benefits of Dallas’ strong farm-to-school program is the increased amount of fresh produce. Lopez says a fresh peach can go from tree to cafeteria tray in 24 hours—and that’s great because 2010’s Healthy, Hunger-Free Kids Act increased the amount of produce required.

Dallas was ahead of the game on many of the nutrition standards codified in that act: whole-grain rich foods, lean meat and reduced fat milk. Even though the district had a head start, it did see participation drop a bit in the first year, but students have returned. “We have to give change a chance to be successful,” Lopez says. “People and students are not going to embrace the change instantly.”

One of the ways Dallas increases awareness and excitement for the new school food is by participating in our Cooking up Change contest, which challenges high school students in cities across the nation to create healthy, appealing school meals. The winning local teams will compete against each other in the national finals in Washington, D.C.

Dallas’ inaugural year is off to a great start, Lopez says. “It was a great experience,” she says. “The students all came up with creative ways to meet the nutrition standards.” The winner of the contest was a team from Wilmer Hutchins High School. Their menu of Chicken Parmesan Sandwich, Green Beans with Cherry Tomatoes and Banana Dip Bites wowed the judges.

We’re excited to see all of the teams compete in Washington, D.C., and we’re heartened by the great things that are happening in Dallas. When much of what we hear about the new nutrition standards is negative, it’s incredibly validating to hear from districts across the country who are meeting—and exceeding—the new standards.