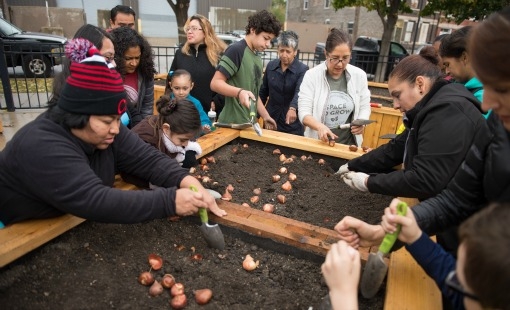 On a brisk but beautiful fall morning, about 40 people gathered at Willa Cather Elementary School on Chicago’s West Side to plant 250 plants in the school’s new native garden. Some of the plants are already dormant—or sleeping, as explained to the kids—for the winter, but next spring and every spring after, they’ll wake up and bloom. The kids also got to spread milkweed seeds, which look a lot like the tufts from a dandelion. Those seeds will also bloom next spring and attract Monarch butterflies to the garden.

Just days earlier, the ceremonial ribbon was officially cut on the new schoolyard, which features an edible Learning Garden from The Kitchen Community, several native plant gardens, a new turf field, multi-sport courts and new play equipment, including swings. All of these new elements include special surfaces and materials that capture rainfall during heavy storms, helping to keep water out of the sewers and prevent neighborhood flooding.

Cather is one of two Chicago Public Schools that recently received a $1.5 million schoolyard transformation from the Space to Grow program. Orozco Community Academy in Chicago’s Pilsen neighborhood also opened a brand new schoolyard this fall. Orozco’s schoolyard also incorporates a special water feature that captures water from the school’s roof and uses it to water a rain garden.

Space to Grow is an innovative public-private partnership co-managed by Healthy Schools Campaign and Openlands that transforms Chicago schoolyards into centers of school and community life that support active and healthy lifestyles, outdoor learning, physical education and engagement with nature. The program receives capital funding and support from Chicago Public Schools, the Chicago Department of Water Management and the Metropolitan Water Reclamation District of Greater Chicago.

At each school, the Space to Grow partners hosted school and community planting days and ribbon cutting ceremonies that encouraged members of the school community and neighbors to help plant and put the finishing touches on the schoolyard. Community engagement is a key element of the Space to Grow model, starting well before the schoolyard is even built. Each school was engaged in a months-long planning process during which teachers, school staff, parents, students and community members provided a vision for their schoolyard. The schoolyards were then designed and constructed to meet the unique needs and visions of each community.

And it doesn’t end there. School and community workshops tailored to support a culture of wellness are part of the support plan that schools follow for two years after the schoolyard is open.

We look forward to watching our two new Space to Grow schoolyards grow and blossom—both literally and figuratively!