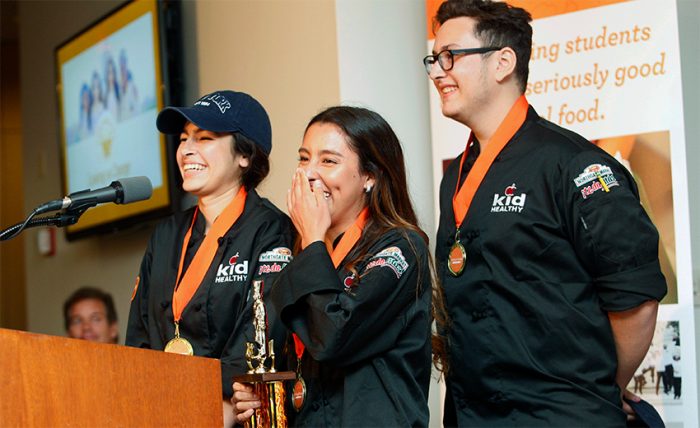 This week, 22 students from cities across the country were in Washington, D.C., to prove that school food can not only be good for you, but that it can taste great. On Monday, teams of student chefs from seven cities competed in the Cooking up Change National Finals at the Department of Education.

And the meals these students created are nothing short of amazing. Kyle, Gerald and Andre from Detroit created a meal that featured items that could be grown in their school’s garden. Jeffrey, Naheishia, Raudel and Edgar from Chicago used caramelization to elevate a simple canned pear half. Carlos, Yasmin and Isabella from Orange County used whole grain brown rice in kheer, a traditional Indian rice pudding.

After the judges tasted all of the team’s dishes, the team from Orange County took first place with their menu of Chicken Kashmir, Pepino Curry and Tropical Kheer. Detroit took second with their menu of Zesty Chicken Rice Bowl, Tomato Lime Cucumber Wheels and Yogurt Splash, and Phoenix took third with their menu of M&J Curry, Zesty Curried Corn and Potatoes and Darn Good Bananas.

Meals were judged on their originality, taste, texture and appearance. Teams scored additional points for the quality of their presentation to the judging panel. In the end, each team was a winner, having earned their way to the national finals by winning their local competition, and having demonstrated the hard work and skill it takes to create healthy and delicious school meals on a tight budget.

Audrey Rowe, a consultant and former administrator for the Food and Nutrition Service of the U.S. Department of Agriculture, served as one of the judges on our esteemed panel. “I was impressed that they took a bold approach to create a school entree students would enjoy. They presented well and deserved to be winners,” she said.

We were honored to welcome Education Secretary Betsy DeVos, who joined us for the reception. DeVos spoke to each of the teams about their experience with Cooking up Change and sampled their dishes. She said the students’ creative meals showed that “you don’t have to sacrifice flavor to eat smart,” and encouraged students to “think big and act boldly” when it comes to their futures.

Teams also had the opportunity to meet with their Senators and Representatives to share their experiences and talk about the importance of healthy school food. Stay tuned for a blog highlighting those incredible conversations.