Pathways to Excellence in School Food: Rewriting the Recipe for Healthy School Food 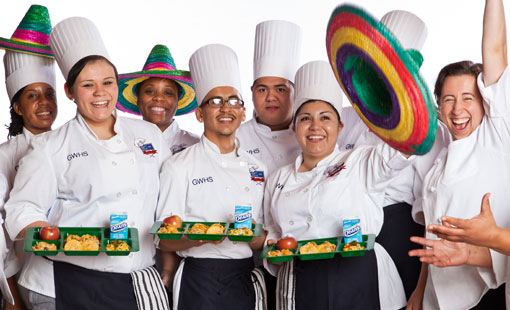 Here’s the first in a series of blogs inspired by Pathways to Excellence in School Nutrition, a new report from HSC.

School food programs across the country are trying to reinvent themselves in response to the critical health needs of students. Over the past year, Healthy Schools Campaign has been working with the Chicago Public Schools to develop a comprehensive plan to achieve excellence in their school meal program. This plan centers around 10 interconnected pathways that are critical to success of every school food program.

Student chefs who compete in Cooking up Change take on the challenge of creating a healthy meal that they and their peers will enjoy and want to eat. The students must create menus that meet nutritional guidelines within a limited budget and that can easily be reproduced en masse for cafeteria-style service. Culinary students at George Washington High School, on Chicago’s South Side, succeeded and won their regional competition with a healthful take on a normally high-calorie, low-nutrient dish: nachos.

Washington student chef Marina Nava says when she and her teammates started out, they tried making a burger with tofu to try something new. But the tofu burgers they had envisioned just weren’t holding together.

When their recipe didn’t pan out as planned, they looked at the food they grew up with. So, the chefs decided to work with what they knew outside of school. They decided to experiment with the cooking they experienced at home, primarily Mexican and Puerto Rican cuisines. Working with this background, they decided to turn a popular food at school and at home into a healthy lunch.

The chefs decided on chicken rancheros and, for the vegetable side, a corn salad reminiscent of elotes, a popular street food snack served from vendor carts in the summertime. But how to make nachos and elotes, the former often greasy and full of additives, the latter slathered in butter or mayonnaise, nutritious and school lunch-friendly?

Nava says substitutions and preparation to enhance flavor without adding unhealthy fats played a major role in the creation of their chicken rancheros and elotes side. They took the traditional framework and made healthy changes: roasting and marinating the chicken and roasting the corn for flavor, skipping the butter and mayonnaise and using dijon mustard with the chicken rancheros instead of a cream-based sauce.

As part of its Cooking up Change prize, Washington’s winning meal was served across all CPS schools and remains in the rotation on the menu. In a place where greasier nachos were once served with frequency and popularity, this lighter iteration of the dish tastes great and has more nutritional value.

And for Nava, the significance of the healthier take on this favorite staple runs deeper: it’s changed the way her family cooks and eats at home, for the better. She says she has taught her family more about healthy cooking, about making those same little substitutions to create better-for-you and flavorful dishes. “High blood pressure runs high in my family, and eating the way we used to, there was a lot of risk,” she says. “But now that my family and I are cooking healthier, there’s a lower risk of that.”

To read more about Marina Nava and the Cooking up Change Washington High School team, check out our blog.

To learn more about Pathways to Excellence in School Nutrition, download the full report. [pdf]

Previous
Orange You Glad You Have This Easy Summer Lunch?
Next
Pathways to Excellence in School Food: Integrating Nutrition into Classroom Learning