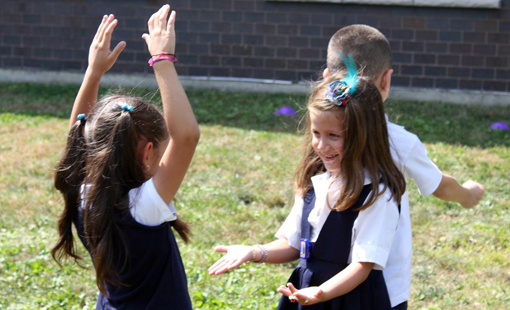 We truly believe in the proven benefits of recess: kids who exercise during recess are more alert in the classroom and are healthier overall. In fact, sometimes students who seem to have the most trouble focusing and completing assignments may need recess the most. That's why one school makes it a policy to use recess as a reward, never as a punishment.

Deborah Reese, principal at Hitch Elementary School in Chicago, spoke to us about her school's philosophy towards recess. There, teachers are encouraged to add extra recess as an incentive instead of taking it away as a punishment. She said that overall, “we found our discipline problems going down when we focused on being less punitive and more rewarding.”

Principal Reese gave a recent example of how this policy worked:

“Kids in the upper grades were spiraling out of control in the hallways between classes.  [Teachers] wanted to meet with us because they wanted permission to 'take away recess.'  My assistant principal, Diane Kieres, said that rather than take it away, she would add an extra recess when she 'caught' classes being appropriate.  On the second day, she named a classroom that was going to get the extra recess, and doubled the reward by telling the teacher that she (Diane) would supervise it, and the teacher would get a few minutes to herself.  Word spread – EXTRA RECESS!”

“If students misbehave while they are at recess, we give them a 2- to 5-minute timeout.  Then we let them rejoin the play.  Kids don’t like having to stand next to the teacher for 5 minutes and watch the others having fun –- this is more effective than sending them to another classroom to work.”

In short, she said, recess is “a treat kids never tire of.”

Special thanks to Principal Reese for sharing her school's success story with us!