Now Is Not the Time to Roll Back School Food Standards, Sonny Perdue 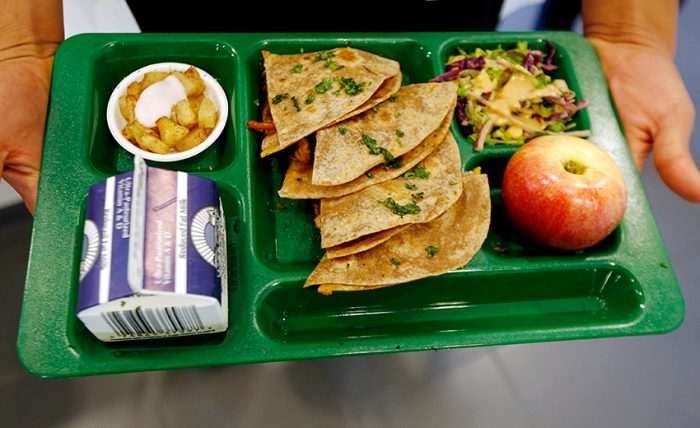 On Monday, U.S. Secretary of Agriculture Sonny Perdue announced the administration’s intentions to roll back some healthy food standards for the school lunch program. Specifically, the proclamation committed the USDA to lessening its commitment to whole grain foods, rolling back sodium reduction targets, and working to change milk regulations to allow more flavored milk.

These changes are out of sync with what most Americans think and what schools are already doing. A recent poll found 86 percent of Americans are in favor of the current standards, and USDA figures say 95 percent of districts are already meeting them.

Many food service directors have already made significant changes to their school meal programs and are committed to moving forward just as the administration chooses to look back. We talked to food service directors in two districts who are not going take the Secretary up on the flexibility he is providing.

Laura Benavidez, executive director of food and nutrition services for Boston Public Schools explains, “Our school district will continue to abide by the Target 2 sodium standard that reduces the amount of sodium in the food our children eat. Because many of our students eat two or three meals a day at our schools, Boston Public Schools believes in providing the most nutritious meals that we possibly can.”

As Bertrand Weber, director of culinary and wellness services for Minneapolis Public Schools puts it, “Over the past five years, our district has moved away from highly processed foods in favor of fresh foods. It is our intent to continue maintaining our standards and provide our students with the best fresh quality food they deserve.”

Secretary Perdue repeated a complaint we’ve discussed here before: that kids simply don’t want to eat the healthier foods required by the standards. But as we’ve noted in the past, the fact that kids would rather eat french fries than a healthy meal isn’t a good reason to stop trying to make school meals healthier. We need to be the adults in the room, making sure that students are getting healthy, nutritious food that ensures they are ready to be the best learners they can be. We need to educate students not just about writing and arithmetic, but about how to make good choices.

Cooking up Change is a great example of what is possible when the standards are seen as a platform rather than a restriction. Using the standards as a jumping off point, our student chefs create nutritious, whole grain, low sodium meals that kids devour, such as this year’s winning meal in Chicago, Vesuvio Chicken with whole grain spaghetti. On May 9, this meal will be included as a lunch option for all 380,000 students in Chicago Public Schools. Also on May 9, Boston Public Schools will be participating in Cooking up Change for the first time, and talented student chefs there will share delicious, nutritious meals that meet the sodium standards Benavidez is committed to upholding.

Just before Secretary Perdue’s announcement, we released our 100 Day Report, reflecting on some of the actions taken by the new administration relating to student health and wellness. We expressed concern at a few early actions that we believe will undercut student access to healthy school food, including a proposal that would eliminate FoodCorps, a program that connects kids to healthy food in schools, and a draft executive order that defines school meals as a public benefit, providing grounds to deport immigrants if they accept school meals for their children. The new USDA proclamation is an additional sign that the administration lacks a commitment to providing healthy school food for our children.

Previous
The Healthy CPS Survey Is Here!
Next
How Medicaid Supports Student Health