Rochelle Davis Invited to Present at the Institute of Medicine 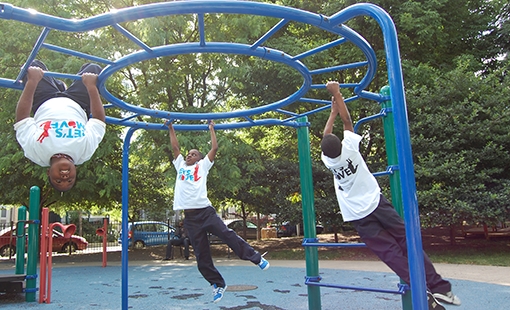 This past July, I was asked to speak to the Institute of Medicine (IOM) as part of its Roundtable on Obesity Solutions and share our experience working closely with Chicago Public Schools (CPS) to improve the school food and fitness environment and how local, state and federal policy influences that work.

Our work is based on the simple, common sense notion that healthy students are better learners and that health and wellness should be incorporated into every aspect of the school experience. Much of our work in recent years has focused on addressing childhood obesity by promoting healthy food and physical activity in schools. While much of our work is Chicago based, we understand the important role that state and federal policies can play in shaping what happens in schools. So, I was pleased to be asked to share my thoughts on the interplay between state and federal policies in this local work.

One of the aspects that I focused on was the effort in Chicago to promote physical education. Illinois was the first state to require daily physical education, but a lax waiver policy allowed CPS to not offer PE during 11th and 12th grade for more than a decade. Advocates, led by the American Heart Association, worked to tighten up the waiver system, placing limits on the number of times a school district can receive a waiver. HSC worked in communities across Chicago by organizing parents as well as working with district officials and other stakeholders to gain support for a new district-wide PE policy. In January 2014, CPS passed a PE policy requiring high quality daily PE for all students. While there is still much work to be done, last fall 80,000 CPS 11th and 12th graders had PE for the first time in more than 10 years.

Clearly, state policy played an important role in CPS’ adoption of the district policy. Our situation in Illinois, in terms of state policy, is better than in most other states. Illinois state policy requires daily PE while 25 percent of states do not mandate PE at all. Most of these state policies do not require a specific instructional time. In fact, only three states—Montana, West Virginia and Utah—require the nationally recommended 30 minutes per day. And, like in Illinois, more than half of the states allow exemptions, waivers and/or substitutions.

On a national level, the U.S. Senate version of the Elementary and Secondary Education Act makes PE a core subject. While the practical implications of this are not clear, it does put PE on more equal footing with other core subjects such as math and English.

I was thankful for the opportunity to speak at the IOM roundtable, and Healthy Schools Campaign looks forward to additional discussions with both public health advocates and educators to figure out how schools can create the conditions to support student health and combat the obesity epidemic.